Roundup of Analyst Expectations Ahead of Apple Q411 Earnings Call

Philip Elmer-Dewitt has put together his list of analyst expectations ahead of Apple's quarterly earnings report this afternoon. The list includes estimates from 16 "independent" analysts and 42 "affiliated" analysts who work for large investment houses or research organizations.

As usual, the independent analysts are much more bullish than the affiliated analysts. The independent consensus expects earnings per share (EPS) of $9.07 on revenue of $33.47 billion. The institutional consensus is EPS of $7.31 on $29.45 billion in revenue. 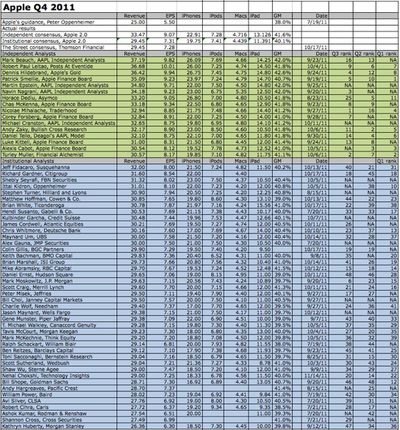 Apple will announce its earnings for the fourth fiscal quarter of 2011 (third calendar quarter) and host a conference call regarding the release this afternoon at 5:00 PM Eastern / 2:00 PM Pacific. The earnings release itself typically comes in around 4:30 PM Eastern.

Last quarter the company announced record-breaking results in a number of areas, including $7.31 billion in profit on revenue of $28.57 billion. For the fourth fiscal quarter, Apple has issued guidance of $25 billion in revenue with profits of $5.50 per share.

The stock and Apple as a company is slowing down Androids marketshare is beginning to crush them. Also it will be overshadowed by the Android event today


We keep hearing this from the Android fans who inexplicably camp Apple-centric sites, yet the opposite keeps happening.

I'm afraid that no competitor's event can overshadow the iPhone-mania that is happening now - worldwide - in response to the 4S.
Score: 6 Votes (Like | Disagree)

What did you expect?

One company creates real value and pushes the market forward. The other one creates vapourware videos and milks the same ish they've been milking for the past 20 years, hoping the trend will somehow continue forever.

There's a reason Apple has MS firmly in their rearview and is seeing them get smaller with every quarter.


I love when you make up crap like this. Yes - clearly Microsoft hasn't done a thing in 20 years.

If you want people to discuss things with you using facts - why don't you practice what you preach?
Score: 3 Votes (Like | Disagree)

The stock and Apple as a company is slowing down Androids marketshare is beginning to crush them. Also it will be overshadowed by the Android event today


And you are on a Mac Site because?

Had to google that event since it is so well reported everywhere.
Just like Apple news.

Spoony
First off I advise everyone to listen in on the earnings call. It's actually really informative and you learn a lot. Tim cook talks a lot and Peter Oppenheimer talks a lot. After that the analysts get to ask 20 mins of questions. Go to apple.com and there is a link in "investor relations" it's quicktime. It's like a 45 min thing. I think it starts like 4:30 or so.

Stock drops after earings if
1. some metric falls short of expections
2. forward guidance is not bullish.

For example This quarter last year Apples Gross margin decreased a lot more than analysis thought. Even though apple crushed all other metrics the stock dropped considerably b/c they got worried apple was making less per device.

Over the past year the gross margin has actually been increasing so that concern was all for nothing.

I expect a pop after hours once they announce earnings. going to have incredible forward guidance with the new iphone 4S. Costs are down meaning margins are up b/c components are cheaper and it's the same design.

The past two quarters the stock went up after the earnings were released.

What did you expect?

One company creates real value and pushes the market forward. The other one creates vapourware videos and milks the same ish they've been milking for the past 20 years, hoping the trend will somehow continue forever.

There's a reason Apple has MS firmly in their rearview and is seeing them get smaller with every quarter.


Also Microsoft at it's height was valued at over $600B. So Apple at $400B although it sounds like a lot is still $200B off Microsoft. Apple has a lot of room to grow. They will eventually pass that $600B mark. Stock is cheap relative to growth and earnings.
Score: 2 Votes (Like | Disagree)

Why does the stock drop after apple announces financial results?


It's an old stock market truism: Buy on rumor, sell on news.
Score: 2 Votes (Like | Disagree)

First, the results will be overshadowed by Steve's passing.

Second, the results will still be terrific by any objective measure.
Score: 2 Votes (Like | Disagree)
Read All Comments