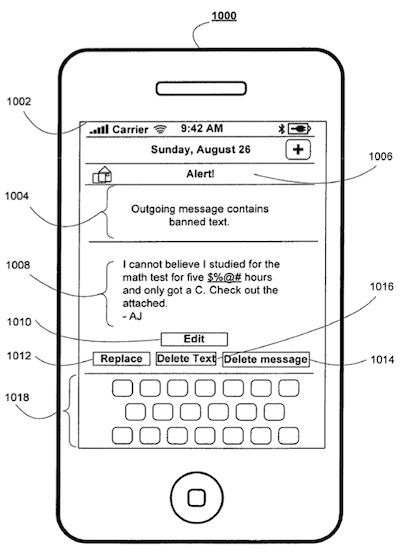 A newly-awarded Apple patent addressing parental controls for text-based communication is receiving a considerable amount of attention from the mainstream press today for its ties to the hot-button issue of "sexting", the sending of sexually-explicit messages that is of growing concern to many parents.

Apple's patent, which was filed in January 2008 and first revealed in July 2009 when the application for it was made public, addresses the means by which a filtering system could be used to block messages such as emails and texts containing objectionable material according to user-defined criteria.

An entire message identified by the filter could be blocked, or the objectionable content could simply be stripped out while the remainder of the message is allowed to be sent or received.

Apple's focus extends beyond that of simply addressing objectionable content, noting that the feature could be used in an educational enviroment to encourage proper spelling and grammar or usage of certain vocabulary words, or to set quotas for usage of foreign words by a student studying a new language.