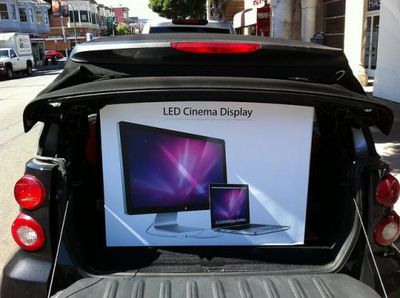 barely fits by Andrew Ng
The 27" Apple Cinema Display is now available at Apple Stores and being delivered to customers. A few early impressions and photos are being posted to our forums. One user bluesteel compared it to the now discontinued 30" Apple Cinema display:

i liked the aspect ratio of the 30". it seems like it was a lot bigger, well at least a little wider and a lot taller. but with the 27 my neck doesn't hurt from having to tilt it up when using the 30". i also liked the matte display of the 30" so much better than this 27's glossy look. there is a little glare, especially from the shiny black bezel, sort of distracting actually. other than that, i like the 27's cable setup. its a lot less clutter...i'm glad the 30's power brick is gone.

Another user Cynicalone posted a comparison photo between it and the 24" Apple Display: