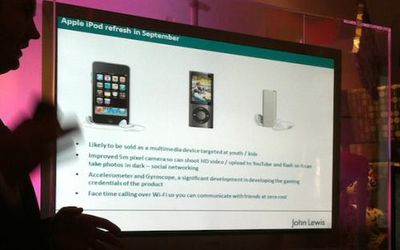 Electricpig.co.uk reports that prominent UK retailer John Lewis has shared what it believes to be details of a forthcoming refresh to Apple's iPod touch line scheduled for a September release. The information, shared at the company's "Xmas in July" event in London, is reportedly based "noises we're hearing from suppliers", and while we consider it fairly speculative in nature, the report is gaining a fair amount of traction today.

John Lewis claims that the next-generation iPod touch will gain a 5-megapixel camera with flash, as well as the same HD video recording capabilities found in the iPhone 4. And while the company's information does not specifically address whether the next iPod touch will have a front-facing camera, it does claim that Apple's FaceTime video calling feature will be included, making such a camera a necessity. Finally, the retailer claims that the iPod touch will gain a gyroscope, as found in the iPhone 4, for more sensitive controls for gaming, augmented reality, and other types of applications.

The report is silent on whether the next-generation iPod touch will adopt the high-resolution "Retina" display found in the iPhone 4, although it seems likely Apple will want to bring the key screen improvement to its iPod line. Also unaddressed is what the brains behind the new device will be, but Apple will almost certainly shift to the in-house Apple A4 system-on-a-chip used in the iPad and iPhone 4.

It is interesting to note that the current iPod touch had been widely expected to carry a rear-facing camera similar to that found in the iPhone 3GS, but the feature, which was seen in multiple prototypes of the device, was removed before the design was finalized. While the reason for the removal of the camera from the final iPod touch design has never been officially confirmed, it appears that Apple may have discovered that the device's thinner profile compared to that of the iPhone did not allow enough room for the higher-quality rear-facing camera found in the iPhone 3GS and felt that an iPod nano-style low-resolution camera taking video only was not an acceptably performing feature in such a device.

It is unclear whether the next-generation iPod touch will face a similar issue incorporating the camera used in the iPhone 4, as the camera module does appear to be fairly thick. Apple could obviously address the issue by increasing the overall thickness of the device, which would also allow room for other features such as an increased battery size, but it is unknown whether the company would be willing to compromise the iPod touch's sleek profile. Alternatively, adopting a more "squared off" design such as that used for the iPhone 4 could provide Apple with the needed additional space at the top of the device when compared to the existing tapered design.

In weighing the next-generation iPod touch's camera chances with design challenges in mind, it in fact appears that a front-facing camera may be even more likely than a rear-facing camera. The lower-resolution front-facing camera found on the iPhone 4 would certainly be thin enough to fit into the iPod touch's existing profile and would deliver FaceTime video calling capabilities, an important feature for the Wi-Fi only device.

Supporting the idea of a FaceTime-enabled iPod touch is a slide presented by Steve Jobs at Apple's introduction of the iPhone 4 indicating that the company expects to ship tens of millions of "FaceTime devices" this year. As noted by Daring Fireball's John Gruber, Apple's decision to use the term "FaceTime devices" rather than simply addressing the iPhone 4 suggests that the company has more in store for the feature, with the iPod touch being an obvious possibility.
Related Forum: iPod touch and iPod
[ 133 comments ]