As it has done on a monthly basis for the past several years, AdMob today released a new Mobile Metrics Report for May 2010. The report highlights worldwide trends in mobile requests to its ad network from over 23,000 mobile websites and applications.

This month's report shows continued strength for the iPhone and other iOS devices during the lead-up to the iPhone 4 launch just last week. Google, AdMob's parent company, is making strong inroads with its Android operating system, however, growing rapidly from a negligible share of the mobile ad request market only a year ago to approximately 25% today. 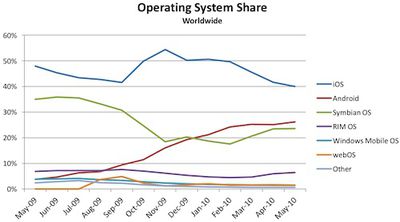 Android's overall strength, however, results from its inclusion on a wide variety of smartphones from a variety of manufacturers. That is in contrast to Apple, which offers essentially only a single iPhone that currently leads the pack by a wide margin with nearly 40% of worldwide ad requests compared to only 6.8% for the second-place Motorola Droid.

AdMob's data also offers an interesting glimpse into the geographic distribution of Apple's "iOS" family of devices. Among the interesting pieces of data included in the report is a note that fewer than half of all iOS devices are located in North America, with 43% residing in the United States and 5% in Canada. When it comes to the iPad specifically, however, the U.S. sees a full 58% of the devices, an unsurprising result given that Apple is still working to roll the device out to its international markets.

In comparing iOS and Android devices, the report shows that Android is rapidly approaching the iPhone's ad request share in the U.S., with 11.2 million unique iPhones registering there during May while 8.5 million Android devices appeared on the company's network. As many have argued, however, Apple's iPod touch and iPad also contribute significantly to the "iOS ecosystem" and, while not true smartphones, should be counted in some way as important players in the mobile web and application market. Adding in iPod touch and iPad data boosts iOS devices to 19.3 million in the U.S., giving iOS a 2-to-1 advantage over Android. Worldwide, the data leans even more strongly in Apple's favor as Android has yet to catch on significantly in most international markets, with iOS devices out-numbering Android devices 3.5-to-1 on a global basis.

With today's release AdMob also noted that its monthly metrics reports will be going on hiatus for at least the next several months as the company looks to rethink the best way of sharing information on the rapidly-growing mobile market with the public.
[ 77 comments ]