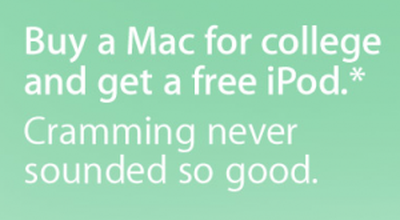 Apple has officially launched the Back to School promo for 2008.

If youre a student, faculty, or staff member and you buy a Mac before September 15, you can get a free iPod touch or iPod nano. After all, isnt college about seizing every opportunity?

Official list of Terms and Conditions (PDF) have been posted, and is primarily targeted at college students, faculty and staff. The promotion runs from June 3rd to September 15th and provides a rebate of up to $299 for qualifying individuals who buy a Mac and an iPod Touch or iPod Nano.

Although they only list the MacBook, MacBook Air, MacBook Pro and iMac on the promo page, the terms and conditions specify that "All new Macintosh computers and the Configure-to-order versions of these products are eligible, except for Mac mini and 17 iMac".

In addition to the US promo, a similar promotion has been announced in Canada.

This is the most aggressive Back to School promotion that Apple has offered and should dramatically increase the installed base of iPod Touch users over the next few months. The iPod Touch uses the same operating system as the Apple iPhone and will be able to run upcoming "iPhone applications" that will be released on the iTunes App Store.

Sunday May 15, 2022 6:14 am PDT by Sami Fathi
iOS 16 will include new ways of interacting with the system and some "fresh Apple apps," Bloomberg's Mark Gurman has said, offering some more detail on what Apple has in store for the upcoming release of iOS and iPadOS set to be announced in a few weeks at WWDC. In the latest edition of his Power On newsletter, Gurman wrote that while iOS 16 is not likely to introduce a major face-lift to...
Read Full Article • 197 comments