The most recent beta of iPadOS 16.1 expands the controversial Stage Manager feature to older iPads, allowing it to work with iPad Pro models that have an A12X or A12Z chip, according to information Apple provided to Engadget. 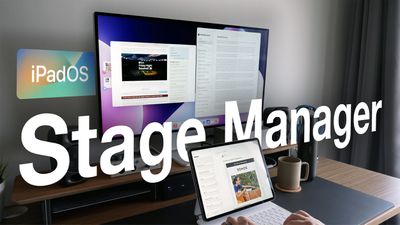 The beta also removes the external display support from ‌Stage Manager‌ for the current time, with the feature set to return in a later iPadOS 16 update. Apple's statement on the matter:

We introduced Stage Manager as a whole new way to multitask with overlapping, resizable windows on both the iPad display and a separate external display, with the ability to run up to eight live apps on screen at once. Delivering this multi-display support is only possible with the full power of M1-based iPads. Customers with iPad Pro 3rd and 4th generation have expressed strong interest in being able to experience Stage Manager on their iPads. In response, our teams have worked hard to find a way to deliver a single-screen version for these systems, with support for up to four live apps on the iPad screen at once.

External display support for Stage Manager on M1 iPads will be available in a software update later this year.

During the ‌iPadOS 16‌ beta testing period, ‌Stage Manager‌ has been limited to the M1 ‌iPad Pro‌ models that were released in 2021, and the ‌M1‌ iPad Air. Every other iPad was unable to use the feature, including 2018 and 2020 ‌iPad Pro‌ models that use the A12X and A12Z chips. Apple maintained that it was not able to offer acceptable performance on non-M1 iPads because the feature requires "large internal memory, incredibly fast storage, and flexible external display I/O" provided by the ‌M1‌ ‌iPad‌ models.

Apple was reportedly unsatisfied with the ‌Stage Manager‌ experience on older ‌iPad Pro‌ models. "Certainly, we would love to bring any new experience to every device we can, but we also don't want to hold back the definition of a new experience and not create the best foundation for the future in that experience. And we really could only do that by building on the ‌M1‌," said Apple's Craig Federighi.

Apple has received ongoing criticism for limiting such a major feature to its newest hardware, leading the company to figure out a way to expand the functionality to additional iPads. The removal of the external display feature in ‌Stage Manager‌ may be what is allowing Apple to offer a suitable experience on non-M1 hardware, but when external display support is reintroduced, it will be limited to the ‌M1‌ ‌iPad‌ models and will not be available on the 2018 and 2020 ‌iPad‌ Pros.

‌Stage Manager‌ is now available on all ‌M1‌ iPads along with the 11 and 12.9-inch ‌iPad Pro‌ models from 2018 and 2020, so long as the latest iPadOS 16.1 beta is installed. Note that Apple is calling this beta ‌iPadOS 16‌ beta 10.

Apple's developers reported to management that they found out they can switch a boolean value in the configuration files to enable Stage Manager.
Score: 36 Votes (Like | Disagree)

I miss the days Apple told us what we wanted and needed and not listen to the public and change things, it’s like they are not the leaders anymore

So listening to consumer feedback and improving their product is a bad thing? Weird take.
Score: 35 Votes (Like | Disagree)

Federighi said the experience wasn't up to their standard on older iPads, not that it couldn't be done.

And now that Apple listened to all you complainers, this is your reaction?

Man, you just can't win with some people.
Score: 33 Votes (Like | Disagree)

moabal
If you complain enough, Apple will eventually listen!
Score: 23 Votes (Like | Disagree)

iDarth_Betar
Wow, I didn’t see that coming. Good on them!
Score: 22 Votes (Like | Disagree)
Read All Comments