As was mentioned in a few reviews, the iPhone 14 and iPhone 14 Plus are the first iPhone models that can be opened from the back side of the device since the iPhone 4S. iFixit says the display and back glass panel are secured with simply two screws and one or two connectors, making both components easier to remove and replace.

"This is such a big deal that it should have been Apple's big announcement—the iPhone has been redesigned from the inside out to make it easier to repair," said Wiens.

iPhone 14 and iPhone 14 Plus models are essentially a sandwich consisting of the display, a mid frame housing most of the internal components, and the back glass panel. According to internal documentation seen by MacRumors, Apple Stores and Apple Authorized Service Providers can replace the mid frame by affixing a new one to a customer's existing display, back glass, and rear camera, so long as those parts are not damaged. 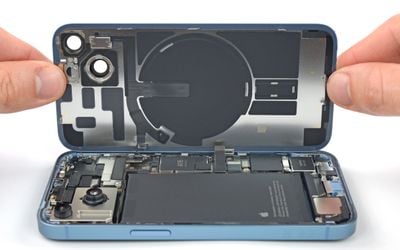 iFixit
"The new metal midframe that supports the structure required an entire internal redesign, as well as an RF rethink and an effective doubling of their ingress protection perimeter," added Wiens. "In other words, Apple has gone back to the drawing board and reworked the iPhone's internals to make repair easier."

The new internal design results in significantly lower $169 to $199 repair fees for iPhone 14 and iPhone 14 Plus models with cracked back glass.

Apple's documentation indicates that a software calibration process known as System Configuration is required after back glass is replaced on the iPhone 14 and iPhone 14 Plus. It's unclear what happens if System Configuration is not completed, but possibilities could range from a non-genuine part warning being displayed on the device to issues with wireless charging, the LED camera flash, and/or rear-facing microphone.

iFixit
iFixit said it is still working on a teardown of the iPhone 14 Pro Max. Other teardowns have already shown that both iPhone 14 Pro models continue to open from the front side as usual, as the internal redesign does not extend to those devices.

Beyond improved repairability, iFixit noted that U.S. models of both the iPhone 14 and iPhone 14 Pro have a "large gap" where the SIM card tray slot used to be located (and still is on international models). The teardown also provides a close-up shot of the standard iPhone 14's logic board with components like the A15 Bionic chip and Qualcomm's Snapdragon X65 modem for both 5G and satellite connectivity via a new n53 band.

What laws require it to be easy?
Score: 16 Votes (Like | Disagree)

adamw
Good to they made the iPhone 14 easier to fix. A good step forward by Apple.
Score: 6 Votes (Like | Disagree)

I still wish they would just have one iPhone, though. Why spread your team out? Have ‘em all focus on ONE iPhone to make it awesome.

Macalway
Problem is, if the phone came disassembled, it would get the highest praise form these freaks LOL

It's amazing what companies will do when the govt thinks about jumping in and regulating their industry...

Sometimes the threat of regulation, nay, regulation, is needed. It's the yin to the free market yang...You need both to have a healthy economy, IMHO.
Score: 5 Votes (Like | Disagree)

yossi
So they could have done this all these years, but now are forced to do it due to "right to fix" laws
Score: 4 Votes (Like | Disagree)
Read All Comments