AT&T today announced the launch of a new location-based routing system for emergency calls in the United States, with the system designed to transmit wireless 911 calls to the appropriate 911 call centers based on a device's GPS location. 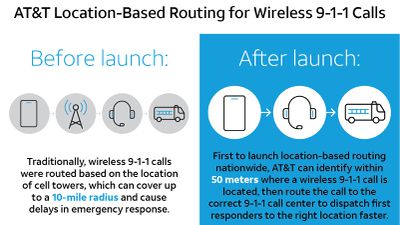 According to AT&T, this is the first-ever nationwide location-based routing initiative, which it is launching in partnership with Intrado. AT&T says that the "Locate Before Route" feature will allow AT&T to identify where a 911 call is coming from within 50 meters of a device's location.

The GPS-based routing is an improvement over prior 911 call routing that relied on the location of cell towers, which can cover up to a 10-mile radius, resulting in slower emergency response times. With calls directed to the appropriate 911 call centers, first responders can get to the correct location more quickly.

AT&T is paving the way to create safer communities and is the only carrier to provide the most accurate solution to reduce wireless 9-1-1 call transfers beyond what the FCC is requiring carriers today. This is especially important in an emergency when lives are on the line.

AT&T has started rolling out the GPS-based routing system, and it is live in Alaska, Colorado, Hawaii, Idaho, Montana, Oregon, Washington, Wyoming, Kansas, Illinois, Iowa, Minnesota, North Dakota, Missouri, Nebraska, South Dakota and Guam. It will be coming to additional regions over the next several weeks, and the nationwide rollout is scheduled to be completed by the end of June.

sorgo
Amazing that it took this long for a service provider to implement such basic-seeming method. Hopefully this addresses the sometimes-wonky, easily-out-of-sync-or-inaccurate “emergency address” wifi calling system, which I have had backfire during a medical emergency once when staying in a different city.

gigapocket1
You would think that this would’ve been done decades ago
Score: 9 Votes (Like | Disagree)

Is this just a carrier Trojan Horse to cover their resale of customers location data?

Probably, but it would still save lives.
Score: 8 Votes (Like | Disagree)

Killbill2
Is this just a carrier Trojan Horse to cover their resale of customers location data?
Score: 7 Votes (Like | Disagree)

Absolutely! Though the address information provided to 911 via WiFi calling has to be manually set within your carrier account. All American carriers require an address to be set in order to enable WiFi calling, but this address must be manually updated when your location changes in order to provide the correct info in the event of an emergency call.

I’m not sure if AT&Ts implementation makes any difference in this regard or not; I haven’t looked into it closer yet.
Score: 7 Votes (Like | Disagree)
Read All Comments