Apple's Beats brand today officially announced the new Powerbeats Pro Wireless Earphones, which, like the AirPods, are wire-free and come with a charging case, but feature up to nine hours of listening time.

The Powerbeats Pro are going to cost $250, and Apple says they are coming in May. According to Apple, the ‌Powerbeats Pro‌ deliver "powerful, balanced sound with dynamic range and noise isolation for a premium listening experience."


The ‌Powerbeats Pro‌, like the current Powerbeats, are sweat and water resistant and include the Powerbeats earhooks along with tips in four sizes for keeping them securely in place during workouts. 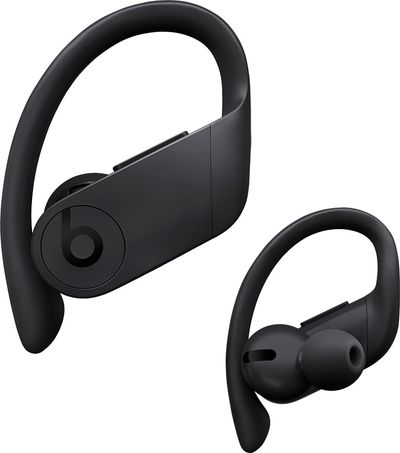 "Powerbeats Pro is a harmonious blend of premium sound, fit and functionality. Powerbeats are already the #1 fitness headphones in the world and they are now untethered, with all the benefits of the Apple H1 chip," said Luke Wood, president of Beats. "No longer do you have to choose between performance and practicality--it delivers the best on both fronts."

To get an ideal fit for most people, Apple tested more than 20 configurations to arrive at an "ergonomically angled housing" designed to nest "comfortably in the concha bowl of the ear with an off-axis nozzle." Apple says ‌Powerbeats Pro‌ are 23 percent smaller and 17 percent lighter than the Powerbeats 3.

There are physical controls on each earbud, with a dedicated volume buttons for adjusting the volume, and a button for answering and declining phone calls and changing the track that's currently playing. Like the AirPods, the ‌Powerbeats Pro‌ automatically detect when they're in your ears and can play/pause music accordingly.

The ‌Powerbeats Pro‌ come in their own clamshell-style charging case, which adds over 24 hours of combined playback with the nine hours of listening time that you get from each earbud. There's a 5-minute Fast Fuel feature that provides up to 1.5 hours of playback in five minutes.

Lalov001
“After much effort, we've concluded Powerbeats Pro will not achieve our high standards and we have cancelled the project.”
Score: 34 Votes (Like | Disagree)

Never liked beats sounding headphones so no thanks airpods are for me, some people will be like wow its black now lol but nah beats never sound good to me

So, if Apple are advertising 9 full hours of use “per charge,” and they have improved sound performance over the AirPods, it might be worth a look relative to the $250 tag, but there are a lot of options other once u get over $250.

AirPods at $175 (est.) is a tough sell; these at $250 might be impossible. But what do I know about sales and purchasing lol.
Score: 10 Votes (Like | Disagree)
Read All Comments

Sunday February 5, 2023 6:07 am PST by Joe Rossignol
Apple has discussed selling a new top-of-the-line iPhone alongside the Pro and Pro Max models in 2024 at the earliest, according to Bloomberg's Mark Gurman. Based on this timeframe, the device would be part of the iPhone 16 lineup or later. In a September 2022 edition of his weekly "Power On" newsletter, Gurman said there was "potential" for an iPhone 15 Ultra to replace the iPhone 15 Pro...
Read Full Article • 350 comments