The plethora of court cases between Apple and other companies over trademarks, design decisions, and patents have only occasionally offered anything of interest to the average observer. Today, however, The Verge has dug up a treasure trove of images of early iPhone and iPad prototypes. 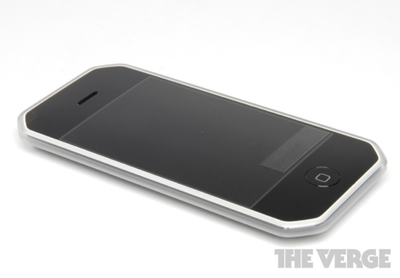 Early designs include an eight-sided iPhone with diagonal corners, early Sony-inspired designs, and another model that has the same aluminum-based design as the old iPod Mini.

Of particular note are multiple iterations of the iPad featuring different types of kickstands, what appears to be a 16:9 model with wide handles on either side, and an eight-sided iPhone with diagonal corners. Also of interest is a slim, sleek iPhone prototype labeled the N90. The N90 was widely believed to be the codename for the iPhone 4, and while this narrow device definitely bear some aesthetic similarities to Apple's glass-and-metal design, this variant appears to feature a much smaller screen.

One Sony-inspired design from 2006, which bears a "JONY" logo in honor of Apple chief designer Jonathan Ive, looks strikingly similar to the iPhone 4 that debuted years later.

The Verge has a number of other images scattered across two different posts. They're worth a look.

AngerDanger
I can imagine Jony Ive's voice as he introduces that prototype: "Until now, people have—albeit inadvertently—associated octagons with authority and restriction. But what we've done is almost mentally rebrand the octagon as something that is really wonderful and liberating. And the end result is practically cathartic."

(I photoshopped/rendered something from this image (http://4.bp.blogspot.com/--yWxs0pVTko/Tck-d4TzGdI/AAAAAAAAAGw/wkfmG_TjIh8/s320/Jonathan+Ive.jpg) to really drive the point home)
Score: 19 Votes (Like | Disagree)

So even when Apple blatantly copies Sony, that is all fine and dandy, but when Sammy was apparently "inspired" by Apple, a court case is immediately started... Ok, then....

Did you read the article?

The design was made by Apple, not Sony, they just decided to put a Sony logo on the concept image to imagine what a nice looking Sony phone would look like. It was just Jony Ive having a little fun, those were not meant to be publicly shown originally.

nickn
So even when Apple blatantly copies Sony, that is all fine and dandy, but when Sammy was apparently "inspired" by Apple, a court case is immediately started... Ok, then....
Score: 17 Votes (Like | Disagree)

So even when Apple blatantly copies Sony, that is all fine and dandy, but when Sammy was apparently "inspired" by Apple, a court case is immediately started... Ok, then....


Copies Sony? Did you even read the article. It was Apple designer who made that, because they wanted to see what Sony phone might look like back in 2006. It was all part of research. It was inspired by Sony's design ethics, but that's not Sony's product. Read!
Score: 16 Votes (Like | Disagree)

barberio
But "The iphone design is obvious!", so why on earth are there all these alternative design prototypes... I mean, it's not like they took a long time on working out the exact way a phone like this should look, because that would mean the design patent might be a valid use of the patent system. :rolleyes:
Score: 15 Votes (Like | Disagree)

east85
Thank god we never got a "menu" button.
Score: 14 Votes (Like | Disagree)
Read All Comments

Friday June 18, 2021 9:41 am PDT by Sami Fathi
After a long wait, YouTube for iOS is officially gaining picture-in-picture support, allowing all users, non-premium and premium subscribers, to close the YouTube app and continue watching their video in a small pop-up window. In a statement to MacRumors, YouTube says that picture-in-picture is currently rolling out to all premium subscribers on iOS and that a larger rollout to all US iOS...
Read Full Article • 181 comments