Nomad, known for its lineup of premium accessories for Apple's devices, today announced the launch of the MagSafe Mount, which is designed to house the MagSafe Charger and keep it secured on a desk. 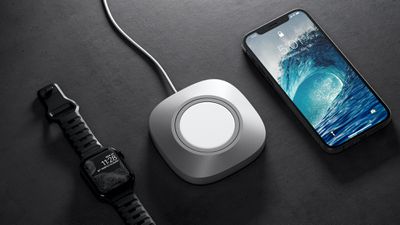 The ‌MagSafe‌ Mount is made from a solid block of stainless steel with a painted satin finish. There's a cutout at the top that fits a ‌MagSafe‌ Charger, with the charger held in place with microsuction tape. A soft rubber on the bottom keeps your desk protected, but this is a mount only -- you need to supply your own ‌MagSafe‌ Charger.

Nomad sent me a ‌MagSafe‌ Mount ahead of launch, and this thing is heavy, so I was surprised when I was able to pick up my iPhone with the ‌MagSafe‌ Mount still attached some of the time. The Magsafe Mount weighs a mount and a half and I thought that kind of weight would keep it on the desk, but if you grab your ‌iPhone‌ in a certain way, the mount can come up with the ‌iPhone‌.

You need to make sure to pick up your ‌iPhone‌ from one side first, with the edge that's hanging off the charger, or with a bit of a twist, which many people probably do anyway. You can also use a finger underneath to do a pry up kind of gesture when you pull it up, which is more natural than it sounds. I do typically pick up my ‌iPhone‌ with a side pull, but I wasn't expecting that ‌MagSafe‌ strength.

In just casual use without thinking about it, I only had the ‌MagSafe‌ Mount lift off my desk a couple of times over the weekend, so it wasn't an ongoing issue as long as I was mindful of how I was picking it up. Since the ‌MagSafe‌ Mount is so heavy, though, I'm worried that I might pick it up wrong one day and send it crashing into my desk.

I've only had the ‌MagSafe‌ Mount on hand for a couple of days, so I haven't had the time to determine whether it's something that's going to bother me over time during day to day usage. I suspect most people will get used to picking an ‌iPhone‌ up off of the ‌MagSafe‌ Mount from the top or the bottom or with a finger at the side and it won't be an issue.

I do wish Nomad had used the same microsuction material used on the inside on the outside to give the ‌MagSafe‌ Mount a stronger attachment to a desk or a table so the slight lifting in some circumstances wouldn't have been an issue at all.

The design of the ‌MagSafe‌ Mount made it difficult to get the ‌MagSafe‌ Charger secured in place, and it's really in there. It's an incredibly tight fit, so this is not an accessory that you're going to want to be taking on and off a ‌MagSafe‌ Charger. The microsuction adhesive on the inside makes it even harder to get off, and I have a bruise on the side of my thumb from trying to get it out.

Because the ‌MagSafe‌ Charger fits so tightly inside the ‌MagSafe‌ Mount, it does look great. It resembles a single piece of hardware rather than an attachment, and it's difficult to tell that there are two pieces. It's machined well and it fits precisely. The design has the USB-C cable routing through the middle and into a channel on the bottom, which contributes to the streamlined design.

At $50, the Magsafe Mount is an expensive addition to a ‌MagSafe‌ Charger, which is $40 on its own for a total of $90, but it has a decidedly Apple-esque design that melds well with the design of the ‌MagSafe‌ Charger.

Note: Nomad provided MacRumors with a ‌MagSafe‌ Mount for the purpose of this review. No other compensation was received. MacRumors is an affiliate partner with Nomad. When you click a link and make a purchase, we may receive a small payment, which helps us keep the site running.

It seems to be around two pounds

How hard is it to put that thing on a scale? Nonsense info that could have been made valuable with thirty seconds of work.
Or two seconds of research on their product page: 23.7oz / 1.48lbs (670g).
Is this supposed to be journalism?
Score: 7 Votes (Like | Disagree)

Johnny Steps
Man even with the weight, it could still be picked up alongside the MagSafe charger? Geez ha ha.
Score: 5 Votes (Like | Disagree)

xnu
Magsafe has a lot of potential for being a great product, but honestly using the single charger takes two hands to pick up my phone most of time, or a strange rocking motion that typically ends with the charger on the floor. The dual charger ends with my watch flying across the bedroom or a banging noise on my end table when i pick up my phone. The initial release of this product isn't Apples best effort. Glad to see some accessories to try to make up for the failures.
Score: 5 Votes (Like | Disagree)

diego.caraballo
And rumors says that iPhone 13 will feature even stronger magnets ? You will need a 10 pound stand to be able to pick “just” your phone.
Score: 4 Votes (Like | Disagree)
Read All Comments