Apple introduced updates to many of the built-in iOS apps in iOS 13, and Maps is no exception. The updated version of Maps has a long list of new features that are designed to make the Apple Maps app better able to compete with mapping apps from other companies.

There's a new Look Around street view level feature, a Collections feature for aggregating lists of your favorite places, a Favorites option for getting to your most frequently traveled places quickly, and some other smaller updates that are worth knowing about.

Subscribe to the MacRumors YouTube channel for more videos.
In this guide, we've highlighted all of the new features that are in the Apple Maps app in iOS 13.

The work done in iOS 12 is continued in iOS 13 with Apple expanding the new Maps app to the entire United States as of January 2020. Apple now plans to bring the updated Maps app to Europe. 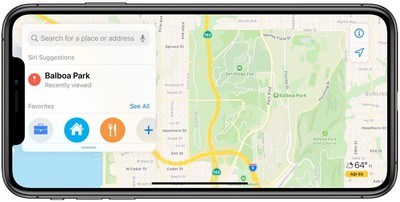 Apple on stage when introducing iOS 13 mentioned these map updates and promised improved detailing for roads, beaches, parks, buildings, and more. Maps in iOS 12 overall looks similar to iOS 13 in states where new Maps have already rolled out, but there could be more detail coming in the future and there are some small changes worth pointing out.

When viewing the main Maps interface, the app now displays road hazards and traffic conditions so you can see the route ahead at a glance. Previously, this information was available, but only when turn-by-turn directions were activated.

In iOS 13, traffic information is visible on the main map too.

iOS 13 adds a Junction View option that's meant to help drivers avoid wrong turns and directional misses by lining them up in the correct lane before a turn or an elevated road.

Siri gives more natural directions in iOS 13. Instead of saying something like "in 1,000 feet turn left," ‌Siri‌ might instead choose to say "turn left at the next traffic light," which is an easier instruction to follow since there's no distance estimation involved.

When you're navigating to something like a concert at a large venue, Apple Maps now offers up improvements that are better suited towards getting you to your end-point destination.

Real-time information like outages, cancellations, and other changes are also listed in the Apple Maps app.

There's a new option to share your estimated time of arrival with friends, family, and coworkers. Your ETA will update dynamically, changing even when there's a significant traffic delay. This feature was removed from iOS 13 during the later betas, but could be re-added in the future.

Place Cards for businesses have been updated to be more helpful and easier to use. You'll see information like times of Today at Apple sessions when looking up an Apple Store, for example, or movie times when looking up a movie theater.

Look Around is a new Apple Maps feature that's designed to be Apple's equivalent of Google Street View. Look Around offers up a street-level view of what's around you or a location you search for in the Maps app.

You can use Look Around in the main Apple Maps view whenever there's a pair of binoculars visible. Tapping on the binoculars icon delves into a close-up street level view of the location in a little card, which you can tap again to get to a full screen Look Around view.

When in Look Around mode, tapping on the display lets you move through the Look Around area, and tapping a spot far off in the distance does a neat zoom in maneuver that's fun to watch.

In Look Around, all notable points of interest, like restaurants, businesses, parks, and more, are highlighted with identifying icons and place names so you can tell what's what.

Look Around is limited to areas where a car can go because it's using data captured from a 360-degree camera on a vehicle. That means you can't zoom into areas like parks or beaches, for example, but you can see what's visible from the street.

At launch, Look Around was limited to parts of California, Nevada, and Hawaii, but it has since expanded to Los Angeles, Houston, New York City, Boston, Philadelphia, and Washington, D.C. Apple plans to continue the expansion in 2019 and 2020.

Collection lists can be shared, so you can make up lists of places for friends and family visiting you in your city and then share it with them, for example.

Favorites is a new Maps feature that lets you search for specific places and then add them to a list. Favorites are meant for places that you visit frequently, and Home and Work are already added by default.

You can add any place you go to often to the Favorites list, such as a favorite restaurant or coffee shop, or a friend's house. Tapping on one of your Favorites brings up directions to that spot right away, so think of it like a speed dial option for Maps.

Apple introduced a redesigned customer feedback interface in iOS 13, which is designed to make it easier for Apple Maps users to submit corrections for things like incorrect addresses, business locations, or operating hours.

All of the new features introduced in the Maps app in iOS 13, such as Favorites, Collections, and Junction View have been added to CarPlay. The Maps app in ‌CarPlay‌ also provides updated route planning, search, and navigation.

Have questions about Maps, know of an iOS 13 Maps feature we left out, or want to offer feedback on this guide? Send us an email here.

Friday January 8, 2021 6:16 am PST by Hartley Charlton
A range of new Apple services could include "Podcasts+," "Stocks+," and "Mail+," according to a new report by Loup Ventures analysts. Apple's subscription service products are increasingly important to its business model and is now almost the size of a Fortune 50 company by revenue, growing by 16 percent in 2020 to $53.7 billion. Loup Ventures highlights that Spotify accumulated 144...
Read Full Article • 137 comments

Friday July 28, 2017 10:07 am PDT by Mitchel Broussard
iRobot has responded to an article posted earlier this week by Reuters, in which it was said that company CEO Colin Angle "could reach a deal to sell its maps to one or more of the Big Three in the next couple of years," representing Apple, Amazon, and Google. Angle said that such shared data could bolster the intelligence of other smart home devices like light bulbs, thermostats, and security...
Read Full Article • 27 comments

Monday July 24, 2017 5:42 pm PDT by Juli Clover
iRobot CEO Colin Angle today told Reuters that he hopes indoor mapping data collected by Roomba automatic vacuum cleaning machines can be sold to a company like Amazon, Apple, or Google in the near future. iRobot's latest line of 900-series Roomba vacuums use simultaneous localization and mapping (SLAM) technology to map rooms while they clean, memorizing room layout and the location of...
Read Full Article • 48 comments

Monday October 31, 2016 1:21 pm PDT by Juli Clover
Apple is continuing to expand the availability of transit directions in the Maps app, today adding transit support in several cities in Ohio, including Cincinnati, Akron, Dayton, Canton, Athens, and some areas of Cleveland. Transit directions in these cities come following the introduction of transit information in Columbus, Ohio, which was added in September. Public transit options in...
Read Full Article • 17 comments