The all-new Mac Studio is currently Apple's most powerful desktop computer, surpassing even the high-end Mac Pro. The ‌Mac Studio‌ also starts at $1,999, substantially less than the $5,999 starting price of the Intel-based ‌Mac Pro‌. 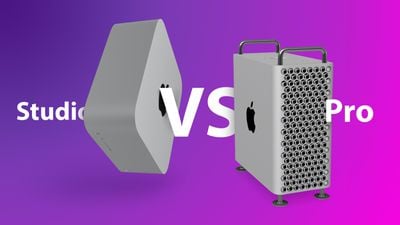 So why is the more expensive ‌Mac Pro‌ still in the lineup and should you buy it over the new ‌Mac Studio‌? Our guide helps to answer the question of how to decide which of these two desktop Macs is best for you.

Comparing the Mac Studio and the Mac Pro

The ‌Mac Studio‌ and the ‌Mac Pro‌ share some essential features, including a silver aluminum design and up to 8TB of SSD storage. Apple lists these four key features of the two devices that are the same:

Although these Macs share some features, the two machines are separated by a huge number of differences, including completely different chipsets, memory capacities, selections of ports, and external display capabilities.

What About the Rumored Apple Silicon Mac Pro?

At its "Peek Performance" event, Apple explicitly teased the launch of a new Mac Pro with Apple silicon, making it clear that the ‌Mac Studio‌ is is not a replacement for the ‌Mac Pro‌. Apple senior vice president of Hardware Engineering John Ternus went as far as to confirm that there is a ‌‌Mac Pro‌‌ coming "another day" to clear up any confusion about the continuance of the ‌‌Mac Pro‌‌ product line, and rumors suggest that a new ‌Mac Pro‌ is expected to be announced soon.

There are two main reasons to buy the ‌Mac Pro‌ over the ‌Mac Studio‌. The first is for its Intel architecture, since some high-level professional applications perform better on native Intel systems, despite the capabilities of Rosetta 2.

The second reason is modularity. The ‌Mac Pro‌ features eight PCI Express expansion slots that be used to customize the machine's hardware for specific needs, such as by adding more storage or graphics cards. The ‌Mac Pro‌'s modularity also means that it is easier to change and upgrade components over time. The ‌Mac Studio‌, on the other hand, is a fully integrated machine with no modularity or opportunity to add or change components.

The ‌Mac Pro‌ is also more versatile when it comes to ports, which users can also add via PCI Express slots, and there is support for additional external displays.

If these factors are unimportant to you, it will be better to get the ‌Mac Studio‌. The ‌Mac Studio‌'s ‌M1‌‌ Ultra chip outperforms the 28-core Xeon ‌‌Mac Pro‌‌ with the highest-end graphics card, meaning that the ‌Mac Studio‌ is a more powerful machine overall and should be faster for many workflows. Considering that its base model is $4,000 cheaper than the ‌Mac Pro‌, the ‌Mac Studio‌ the best option for users who do not absolutely need the ‌Mac Pro‌'s specific advantages.

fwmireault
You forgot that the Mac Pro can be configured with 800$ wheels, that’s a big advantage over the Mac Studio
Score: 72 Votes (Like | Disagree)

What if I need some cheese grated though? Where is the mac studio then??

It has all those little holes on the back. It grates extra-fine.
Score: 18 Votes (Like | Disagree)

There's been a few benchmarks already showing the Mac Pro with an edge in graphics using the older Vega GPU options. It makes me skeptical that M1 Ultra will actually outperform a top end Radeon 6900 option in GPU tasks. Seems iffy it would beat a 6800 either.

The only claim I've seen of this so far has been Apple's slides, which haven't exactly held up.
Score: 13 Votes (Like | Disagree)

MayaUser
The Mac Pro gpu will be out of this world
Score: 12 Votes (Like | Disagree)

There are two main reasons to buy the Mac Pro over the Mac Studio. The first is for its Intel chip, since some high-level professional applications perform better on native Intel systems despite Rosetta 2.

The second reason is modularity. The Mac Pro features eight PCI Express expansion slots that be used to customize the machine's hardware for specific needs, such as by adding more storage or graphics cards. The Mac Pro's modularity also means that it is easier to change and upgrade components over time. The Mac Studio, on the other hand, is a fully integrated machine with no modularity or opportunity to add or change components.

The Mac Pro is also more versatile when it comes to ports, which users can also add via PCI Express slots, and there is support for more external displays.

I'm pretty sure that there are two other possible main reasons for buying the Mac Pro:

One is that you have a use case that needs massive amounts of RAM, in which case clearly 128GB vs 1.5TB is a very, very nontrivial difference. (Also not sure that the M-series RAM has ECC-equivalent error correction; I assume not, which is another nontrivial need for certain use cases.)

And the other is you have a use case that actually takes advantage of $10,000+ worth of GPUs--dual Pro W6900X 32GB or dual Pro W6800X Duo 64GB. The performance on the 64-core GPU with 128GB of memory, some of which is going to be used by the CPU, is not going to be on that level even if the task is well optimized for it.

The Mac Studio is awesome, and will almost certainly be my next desktop when I eventually replace my top-of-line Intel iMac. But we've got computers to run simulations at work that need well over 128GB of RAM for decent performance, operating on 40TB datasets (stored on a RAID6 array with PCIe controller, although the storage could be handled just as well externally), and if we were to run those on a Mac rather than the current commodity hardware, we'd most definitely buy a Mac Pro, not a Mac Studio. It has nothing to do with the Intel CPU or modularity. We just need the ridiculously large amount of RAM.
Score: 12 Votes (Like | Disagree)

Moonlight
What if I need some cheese grated though? Where is the mac studio then??
Score: 12 Votes (Like | Disagree)
Read All Comments