Meta CEO Mark Zuckerberg today announced the launch of the Meta Quest Pro, a new $1500 mixed reality headset that's aimed at "making the metaverse a reality." The Meta Quest Pro has several features that are rumored for Apple's AR/VR headset, which we are expecting to see launch next year.


The mixed reality headset incorporates both augmented and virtual reality, and it is equipped with pancake lenses" that keep it sleek while offering high resolution. Apple too is said to be using pancake lenses for a thin and light design.

The Meta Quest Pro has a curved battery at the back for a more ergonomic fit, and it is using high-resolution outward-facing cameras to capture 4x as many pixels as the prior-generation Meta Quest 2. It is, however, using LCD displays, while Apple's headset is rumored to use micro OLED screens. 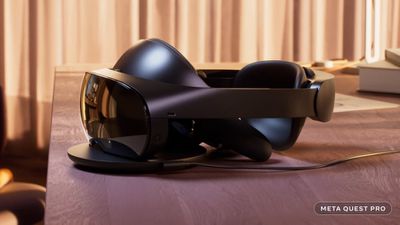 Apple's headset is said to have more than a dozen cameras for functions like eye tracking, spatial detection, expression detection, and skin detection, and Meta is beating Apple to some of these features. The Meta Quest Pro has 10 high-resolution sensors for eye tracking capabilities, plus Meta says that it is able to "capture natural facial expressions," translating them to a virtual avatar.

According to Meta, mixed reality will let you combine the physical world with the virtual, so you can do things like set up a virtual workspace while using your physical keyboard and mouse.

Other Meta Quest Pro features include a Qualcomm Snapdragon XR2+ chip (Apple's headset will use its Apple silicon chips, possibly the M2 or M3), 12GB RAM, 256GB storage, Touch Pro controllers that track their position in 3D space, and a 45W charging dock.

The Meta Quest Pro is available for preorder as of today and it is set to begin shipping out on October 25.

Chicagoblah
no thanks, standard reality is enough for me
Score: 66 Votes (Like | Disagree)

TheYayAreaLiving ?
No thank you! Not trustworthy!

antiprotest
Not expensive enough. I will wait for Apple's more expensive one.
Score: 44 Votes (Like | Disagree)

iDarth_Betar
Wonder if Mark has tried stepping outside?
Score: 31 Votes (Like | Disagree)

Mikey44
I realize that Meta gets a lot of hate, but I’m more excited about this announcement than I have been about any of the Apple ones of late. Meta tries to show us behind the curtain in terms of research that they are doing and what they foresee as the next steps of the platform. While WWDC has done this to some extent, it’s limited in its scope, and feels in many ways stale.

What was the breakout feature in iOS 16? The Lock Screen. That’s the biggest change in iOS 16. You could say the new multitasking view in iPadOS but it’s all just small upgrades at this point.

Meta is trying to build a whole new category and I for one am all in.

Do I trust Meta more than I did before? Heck no. But at least they are trying something new and have some ‘courage’.
Score: 30 Votes (Like | Disagree)
Read All Comments