Apple today announced the Mac Studio and the Studio Display, a setup that includes new Mac situated between the Mac mini and the Mac Pro alongside a new mid-level display. 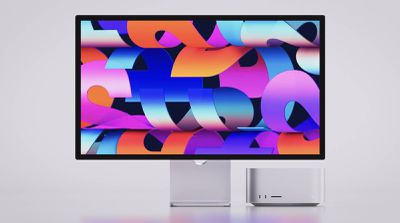 The ‌Mac Studio‌ and Studio Display are meant to be paired together, but as expected, they are purchased separately to allow users to customize their setups.

To get the full "Apple Studio" experience, customers will need to purchase the ‌Mac Studio‌ itself alongside the 27-inch Studio Display and accessories separately.

Adding the highest-end Studio Display with nano-texture glass and the upgraded tilt- and height-adjustable, plus the new Magic Keyboard will push the total cost to $7,497, plus an additional $99 for a Magic Mouse or $149 for a Magic Trackpad.

But if you really want maximum performance, the highest-end ‌Mac Studio‌ with the brand-new M1 Ultra, which has a 20-core CPU, 64-core GPU, 128GB of memory, and 8TB of storage, costs $7,999 alone, without a display, keyboard, or mouse/trackpad.

With the Studio Display and accessories, the complete highest-end "Apple Studio" experience will cost customers $10,497, plus your choice of keyboard and trackpad, and you can obviously go even higher if you want to use multiple displays.

The ‌Mac Studio‌ and Studio Display are available for pre-order starting today.

wyarp
I'm a 'professional' user, but neither I, nor the company I work for can justify/afford these kind of prices (or anywhere near) for such a set-up! Please, pleeeeeeeease can we just have have a 27" iMac that's an upgrade from the current M1 24"!???
Score: 12 Votes (Like | Disagree)

magbarn
The “pros” can keep this but why did they replace the iMac 27 with this overpriced getup?!
Score: 10 Votes (Like | Disagree)

macmedal
But at the other end of the spectrum for the mere mortals who don't need Pro spec it is a substantial price hike compared to the entry level iMac 27" when you include Magic Mouse and keyboard.
Score: 10 Votes (Like | Disagree)

garotemonkey
This pasta maker look is getting out of hand!!

As I posted on another thread:

I can not believe those who are complaining about the price of the Studio. $6,000 for all that performance is a bargain.

Back in 1988 when I started doing serious CAD work on military hospitals, I bought the first 486 computer released. It was a 486-25mhz, with a Rendition hi res graphics card, special hard drive and controller, and a 20" Monitor. It cost me $10,000, which adjusted for inflation is $23,765 in todays dollars. Intel released the 50mhz version of the 486, so I upgraded to that for $500. I needed every ounce of performance to handle the big composite floor plans I produced. I was self employed at the time, worked a part of Communication Consultants trio.

When you are in business, you buy the machinery necessary to do the job most efficiently.
Score: 7 Votes (Like | Disagree)
Read All Comments