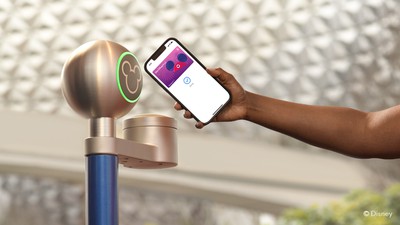 Disney's MagicBand is a colorful wristband that guests can wear at Walt Disney World to enter the theme parks, unlock their hotel room, and buy food and merchandise. MagicMobile brings a contactless way to access many MagicBand features using only an ‌iPhone‌ or Apple Watch.

Guests will be able to create a Disney MagicMobile pass through the My Disney Experience app and add it to the Wallet app. The user's ‌iPhone‌ or Apple Watch can then be used at the same contactless access points as with a MagicBand. There is also the option to use a MagicBand alongside a MagicMobile mobile pass, so guests do not need to choose one over the other.

Initially, MagicMobile will be exclusive to Apple devices only, but the service is expected to come to Android devices at a later date.

Yokon54
As an annual passholder, FINALLY!!
Score: 14 Votes (Like | Disagree)

Caliber26
For years, I’ve been dreaming of the day when I could just tap my Apple Watch to enter the parks and it’s finally happening! ??
Score: 14 Votes (Like | Disagree)

I’d prefer to save as much battery as possible during a long day at Disney, because they are some long days.

I wonder how much of a drain this app would be.

It’s nfc. It won’t affect battery at all.
Score: 8 Votes (Like | Disagree)

yay, now they can track even more info while we're in the parks!

Snarkiness aside, this actually reduces what Disney can collect. The Magic Bands have two sets of antennas inside them: One is a near-field chip that you have to tap against something to make it work, just like how Apple Pay does, or the plastic cards that you can request from Disney if you don't want to use a Magic Band. That's what this new feature replaces.

Magic Bands also have a battery powered antenna in them that works like the EZPass toll transponder in your car which enables Disney to automatically capture ride photos for a coaster train full of guests, display your name within ride special effects, or (probably) whatever other crowd tracking Disney does to see where people go throughout the day. The Apple Watch doesn't have this feature, so the Mouse wouldn't be able to track you if you used this exclusively.
Score: 7 Votes (Like | Disagree)

ghostface147
That's cool. Part of the fun is choosing what style band you want when you make your reservations. Then swapping bands when you're there to whatever you want.
Score: 7 Votes (Like | Disagree)
Read All Comments

Wednesday June 2, 2021 2:18 pm PDT by Juli Clover
Apple today introduced a new mini website that's dedicated to the Wallet app on the iPhone, highlighting the benefits and features that are available. Apple explains that debit and credit cards can be added to the Wallet app "with no added effort," making them available for Apple Pay. The site also promotes Apple Cash and Apple Card, both Wallet app features, as well as transit cards that...
Read Full Article • 65 comments

Wednesday February 17, 2021 11:30 am PST by Tim Hardwick
Disney+ is set to expand its streaming service offering next week with a rollout of its more adult-aimed Star brand to existing subscribers in Europe, Australia, New Zealand, and Canada. According to CNET, the Star brand will include content from Disney Television Studios, FX, 20th Century Studios, and 20th Television that's more adult-friendly, as opposed to the all-ages content that's...
Read Full Article • 43 comments