LG's UltraFine 4K Display listing appears to have been removed from regional Apple Stores across Europe sometime over the last 48 hours. 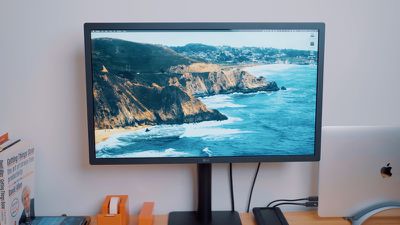 The LG monitor was out of stock for quite some time in Europe over the holiday period. Now it no longer shows up in searches of Apple's online stores in the Netherlands, France, Germany, Italy, the United Kingdom, and several other European countries.

This isn't the first time LG's UltraFine Displays have been unavailable to order on Apple's online stores in some parts of the world. However, on previous occasions, the displays were out of stock and eventually replenished, and at no time were the listings removed. That they have been this time round could suggest that one or both are set to be discontinued.

Introduced in May 2019, the UltraFine 4K features a 23.7-inch display with a 3,840 x 2,160 pixels resolution, two Thunderbolt 3 ports, three downstream USB-C ports, up to 500 nits brightness, P3 wide color gamut support, and built-in stereo speakers. The display is priced at $699.95 on Apple's online store in the United States.

The Thunderbolt 3 LG UltraFine 5K Display offers a 5,120 x 2,880 resolution with 14.7 million pixels and P3 wide color gamut, plus built-in stereo speakers, a camera, a microphone, and an adjustable stand at a $1,300 price point.

Apple continues to sell its high-end, 32-inch Pro Display XDR with a 6K resolution for $4,999, and a Bloomberg report last week claimed Apple is working on a lower-priced external monitor that would be sold alongside it. However, that product is said to be in early development and is therefore unlikely to launch anytime soon, making the apparent lack of LG UltraFine Displays harder to gauge.

(Thanks Colin and Alpar!)

Hell, take the old Thunderbolt Display - the 24" one - swap the cables, put a really good 4K panel in it and laminate it to the front glass and done. That'd be just fine.
Score: 13 Votes (Like | Disagree)

mctrials23
I've had two of the original 21.5" 4K ultrafines since launch and apart from screen burn in they have been amazing. Personally I really like the simplistic styling of them. So many monitors look cheap and tacky with silver, accents and horrible "trendy" stands.

I am still struggling to find something that will give me a really nice improvement on these without spending silly money 3 years later.
Score: 8 Votes (Like | Disagree)

Spock
All they really need to do is take the rumored redesigned iMac, rip the computer out of it and boom, Apple display. A second display for the new iMac that lines up perfectly would be something that Apple has never done. It would also be perfect for the Mac mini, especially if they could keep the price under $1,000.
Score: 5 Votes (Like | Disagree)

Successful Sorcerer
Hope Apple releases their own 24" 4k, 27" 5K and (cheaper than the current) 32" 6K soon! Would go well with refreshed iMacs and Macbook Pros.
Score: 4 Votes (Like | Disagree)

I still say its worth the lack of aggravation just to buy the XDR.

Do you understand that the XDR is completely out of the question for a vast majority of users, simply due to price?

I think we all understand how amazing it is...
It's just way too expensive for most users.

Suggesting we all just "get it" - isn't really helpful
Score: 4 Votes (Like | Disagree)
Read All Comments

Thursday March 24, 2022 3:43 am PDT by Sami Fathi
Following the latest macOS Monterey 12.3 update, users are reporting several problems when using external monitors, ranging from Macs not detecting displays at all to inaccurate screen output, according to posts on the Apple Support and MacRumors forums. In the ten days since the update became available to the public, users have already reported issues with the update bricking Macs that...
Read Full Article • 189 comments