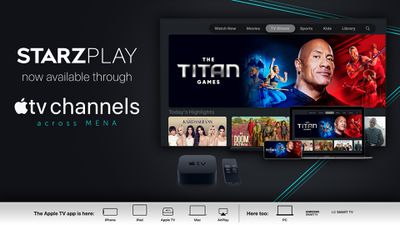 Starting today, customers in the United Arab Emirates, Saudi Arabia, Oman, Bahrain, Qatar, Lebanon, Jordan, and Egypt can sign up for a seven-day free trial and subscribe directly to STARZPLAY in the Apple TV app for $11 per month. Apple TV Channels content can be streamed on demand or downloaded for offline viewing.

STARZPLAY offers both Hollywood and Arabic movies, TV shows, documentaries, kids' entertainment, and original content. The service features thousands of titles, ranging from the original series "Baghdad Central" to fan favorites like "The Big Bang Theory." The service is a subsidiary of the U.S. network STARZ.

Built into the Apple TV app, the Apple TV Channels feature allows users to subscribe to and watch content from participating services without downloading any apps, including HBO, STARZ, Showtime, EPIX, and more.

Wednesday July 21, 2021 9:37 am PDT by Joe Rossignol
Verizon this week announced that it will be releasing a Fios TV app for the Apple TV 4K, Apple TV HD, and Amazon Fire TV tomorrow, July 22, providing Fios TV subscribers with additional platforms to watch live television. All new Fios TV plans will come with Verizon's voice-powered Fios TV One box at no additional charge, and instead of subscribers having to pay a fee for a second Fios TV...
Read Full Article • 27 comments